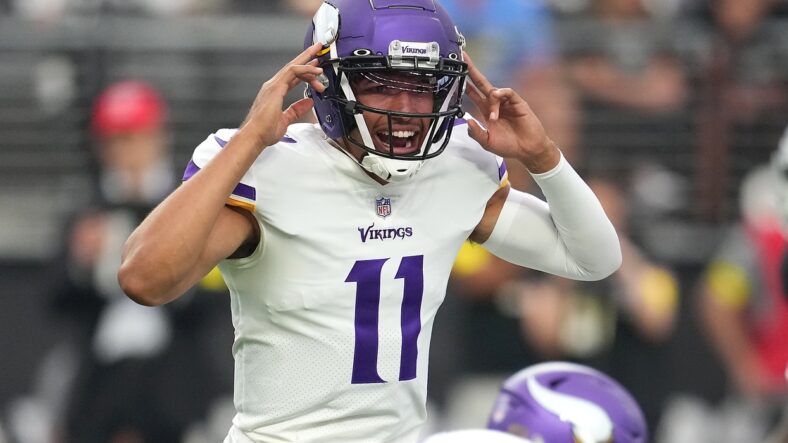 The preseason games are now behind us. As a result, we can step back to get a bird’s eye view on the numbers Kellen Mond and Sean Mannion put together across a full three games.

Now, I should caution that I won’t be offering a complete breakdown of all that Mond and Mannion did. Instead, I’ll merely be highlighting a few key statistics to help illuminate how things went. The Vikings’ website includes a statistics page that offers some of the numbers:

Perhaps it’s worth mentioning that Mond took 5 sacks whereas Mannion took 3. Quite often, a sack is the result of poor play from the offensive line. However, there are also times when the QB needed to be more decisive, getting rid of the ball so the pass rush can’t get to the quarterback.

Neither Kellen Mond nor Sean Mannion had a dominant preseason. As a result, there’s a distinct possibility that Nick Mullens will be this team’s QB2 by Week 1 against the Packers.

At this stage, it’d be somewhat surprising to see both Mond and Mannion make the roster. Trading for Mullens suggests that the team believes he can have a role in Minnesota. In his career, Mullens has started 17 games and thrown 26 TD passes. Combined, Mannion and Mond have 3 starts and 1 TD; all of those stats belong to Mannion.

We should remember that both QBs had receivers drop balls, so their numbers could look a fair bit different if it weren’t for these issues.

Part of the evaluation will probably involve who has the most upside. If that’s a critical factor, then Mond will likely be the one who snags a spot. It’s possible that the sophomore can find a role in the NFL, either as a starter (someday) or as a primary backup.

Another more outside-the-box idea is that there are going to be some QBs available after teams shrink down to 53 men. Maybe the QB2 isn’t even on the roster, folks.

Regardless of what Kwesi Adofo-Mensah and Kevin O’Connell decide to do at backup QB, the hope certainly is that Kirk Cousins will be capable of playing all 17 regular season games. If Cousins isn’t able to, then the Vikings offense may end up taking a sizable step back.