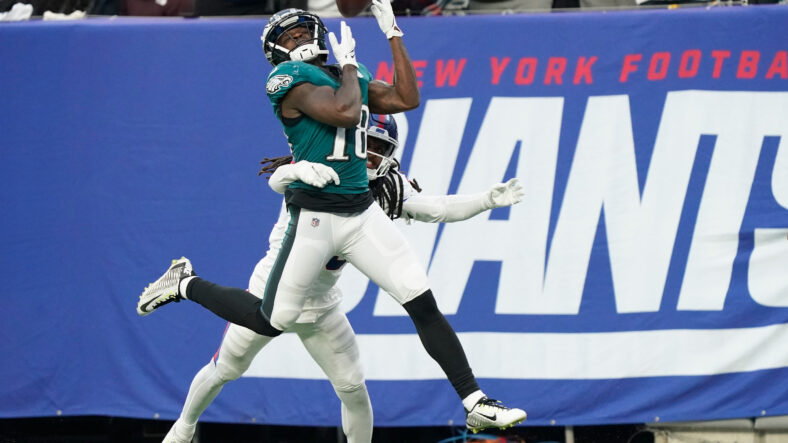 The Minnesota Vikings surprised fans and analysts across the NFL when they traded for Philadelphia Eagles wideout Jalen Reagor. The 2020 first-round pick had failed to live up to expectations in Philadelphia, compounded by (yes, I have to say it) the fact that he was selected one spot ahead of Justin Jefferson in the draft.

To make way for Reagor, the Vikings waived 2021 fifth-round pick Ihmir Smith-Marsette. It appeared to be a foregone conclusion that Smith-Marsette was going to be the team’s WR4 once the season began. However, Smith-Marsette was also being tried out at punt returner. This experiment didn’t go very well, as the former Iowa player never seemed comfortable with the position.

Many believed that moving on from Smith-Marsette for Reagor was a mistake. Sure, his special teams prowess was lacking, but he flashed potential late in 2021 as a wide receiver. Reagor’s punt return ability didn’t appear to justify jettisoning off a young receiver.

However, to just brush Reagor off as a non-contributor to the 2022 Vikings offense would be misguided. In fact, one could make a case that he wasn’t exactly in a position to succeed in Philadelphia.

As a rookie, Reagor had Carson Wentz and Jalen Hurts throwing the ball to him (PFR offers some helpful stats). In 12 games, Wentz completed only 57.4% of his passes for 2,620 yards, 16 touchdowns, and 15 interceptions. Hurts wasn’t any better in his four games starting, completing 52% of his passes for 1,061 yards, six touchdowns, and four interceptions.

2021 was a little bit better for Eagles quarterbacks. However, the final stat line was still underwhelming. Hurts started 15 games, completing 61.3% of his passes for 3,144 yards, 16 touchdowns, and nine interceptions. Gardner Mishew completed 68.3% of his passes in two starts (and four games total) with 439 yards, four touchdowns, and one interception.

Sometimes when a skill position player struggles, they are bypassed by another player on the roster. This shows that there were opportunities for production that a player just didn’t take advantage of. This happened in 2016 when the Vikings drafted wideout Laquon Treadwell in the first round. Treadwell caught one pass for 15 yards all season. Adam Thielen, after two years of climbing the depth chart, filled Treadwell’s lack of production with 69 receptions for 967 yards and five touchdowns.

In Minnesota, though, Reagor doesn’t have to look very far to find another receiver who struggled as a rookie. K.J. Osborn only saw the field in 2020 as a punt returner and struggled with ball security all year. With no offensive snaps, it would not have been a surprise to anyone had he been cut prior to the 2021 season.

Instead, Osborn, with the help of new wide receivers coach Keenan McCardell, found himself as a reliable target in the 2021 Vikings offense. He caught 50 passes for 655 yards and seven touchdowns, including a walk-off score against the Carolina Panthers in Week 6. People who watched him in this year’s training camp are expecting even bigger things for Osborn this season.

Now, does this mean that we should expect Jalen Reagor to all of a sudden be a 600-plus yard receiver? No, but he shouldn’t have to be either. The Vikings have one of the deeper three-receiver sets in the league with Jefferson, Thielen, and Osborn. Running back Dalvin Cook is set to be used more in the passing game this season. And many are expecting a healthy Irv Smith, Jr. to finally make the leap at tight end.

But this doesn’t mean that there isn’t a spot for Reagor in the offense. His 4.47-speed and ability to stretch the field could be an asset for the Vikings. Their other three wideouts are talented but might not be true “burners” when it comes to deep speed. Using Reagor as a deep threat could do wonders in stretching the field even more than the team already plans on doing.

This is a low-risk, high-reward trade for the Vikings. The team sent the Eagles a 2023 seventh-round pick and 2024 conditional fourth-round pick for the former first-round receiver. In Minnesota, Reagor won’t have to deal with the burden of his first-round draft status. There won’t be any rush to get him onto the field on offense, and he is has been a productive punt returner so far in his career.

At worst, all he’ll do is return punts and secure a change in possession. At best, though, Jalen Reagor could find that moving to Minnesota could be what unlocks his potential.