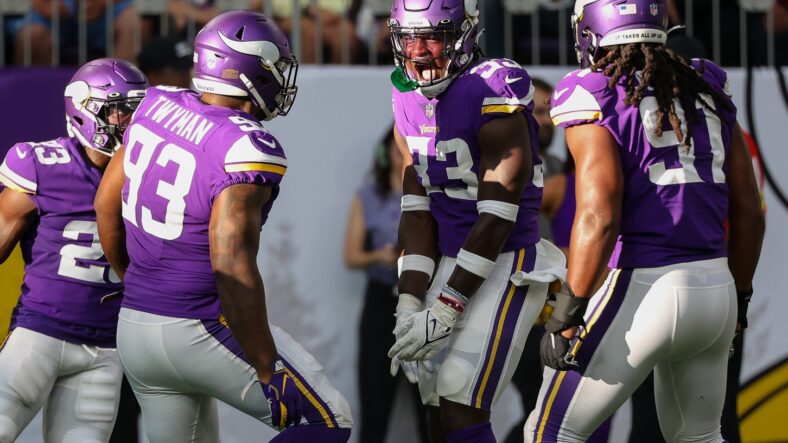 The preseason is now behind us. Before training camp arrived, I did a full 53-man Vikings roster projection. Several weeks have passed; several games have been played. The next round of cuts will likely bring some surprising decisions from Minnesota.

Below, you’ll find my best guess for how things will shake out. For players I no longer believe will make the team, I crossed their name out but left them there as a reminder. Player additions are included in italics. At the end of each line, there is a count for how many players per position. Finally, I’ve collapsed the DT and DE positions since the defensive linemen will get shifted around so much.

With all that said, take a peak at the projection.

A few thoughts on this version of the Vikings roster projection.

At the very top, there is a new name at QB. Mullens isn’t guaranteed a spot on the final roster, but he was brought in for a reason. I believe he’ll be the QB2 in 2022. I also think they’ll keep Mond since he was a third-round selection very recently.

Tight end also saw an increase. Ellefson is likely to have a role on this team as a blocking specialist, as Kevin O’Connell recently suggested. At this stage, I think it’s unlikely the team keeps less than 3 tight ends given that Smith is working his way back from an injury.

To help make room for the increase at TE and QB, Wyatt Davis has his name scratched. He’d be a candidate for the practice squad if no one snags him.

Defensively, the additions are Chandon Sullivan and then T.Y. McGill, who has been wonderfully disruptive through the preseason. Truthfully, I didn’t know too much about McGill coming into preseason, so I mostly believed he’d be camp competition. I’m very happy to be wrong. It currently looks like he could have a role as a pass-rush specialist.

At corner, it’s a one-for-one switch between Hairston and Sullivan.

Making the numbers work has meant making two more projected cuts. The McGill addition prompted me to guess that Bullard will be cut. Asamoah’s strong preseason makes me wonder if the team will carry five middle linebackers. Lynch may end up being let go.

Finally, I’ll admit that I got it wrong with the punting competition. If I didn’t already know that Jordan Berry was cut, then I’d have included him in this projection.

At the end of the day, I’m like everyone else who is speculating about the final roster. We can’t be certain about the final cuts until they actually occur, so by no means should you feel that this Vikings roster projection will perfectly predict things. Rather, it’s simply one man’s best guess.

As things progress in the coming hours and days, we’ll learn about who makes it on the Minnesota Vikings 2022 roster.