The first three weeks of college football has brought a few fun games, but largely, it has been the big programs beating up on smaller programs in order to tune up for the rest of the season. We’re officially at that point in the season where games start to get serious as the conference schedules get underway nationwide for Week 4. Here are some of the matchups to keep an eye on this week as college football conference play begins.

Wake Forest used to be a house of horrors for Clemson, but those tides have turned. even in a down year last season, the Tigers went in and dominated the Demon Deacons. Now, both teams are at the peaks of their powers.

Clemson takes one of the top defenses in the world to take on a high-flying Wake Forest offense that is scoring 42 points per game so far this season. As long as DJ Uiagelelei handles his business, Clemson should win this game on the road.

The Minnesota Gophers have jumped out to a fast start in 2022, and they look like the best team in the Big Ten-West through three weeks. Mohamed Ibrahim is one of the best running backs in the country, and the offensive line has been keeping Tanner Morgan’s jersey clean.

On the other side, Michigan State is coming off a tough loss to the Washington Huskies; a game in which the Spartans fell down by as many as 25 points. This is an important game for both sides as they start their Big 10 conferences.

KJ Jefferson is trying to solidify himself as one of the top draft prospects at the quarterback position. Just one week ago, Tyler Van Dyke tried to lead the Miami Hurricanes into Kyle Field, and they got outclassed by Texas A&M’s defense.

If Arkansas can string together a few drives and even come away with a road win, that will ensure they are competitors this year, and Jefferson is one of the top QBs in this class.

Oregon State is no slouch this year in the PAC-12 with QB Chance Nolan under center. This is a high-flying group, and the crowd in Corvallis will be raucous. Even for a team ranked inside the top-10, this won’t be a walk in the park for the USC Trojans.

Caleb Williams has helped lead the Trojans to over 50 points per game over the first three weeks, but this is one of the teams in their conference that could keep up with them. The over/under is set at 70.5 points right now, and this game should easily hit that mark if these two teams live up to the hype. 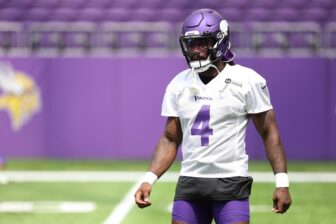