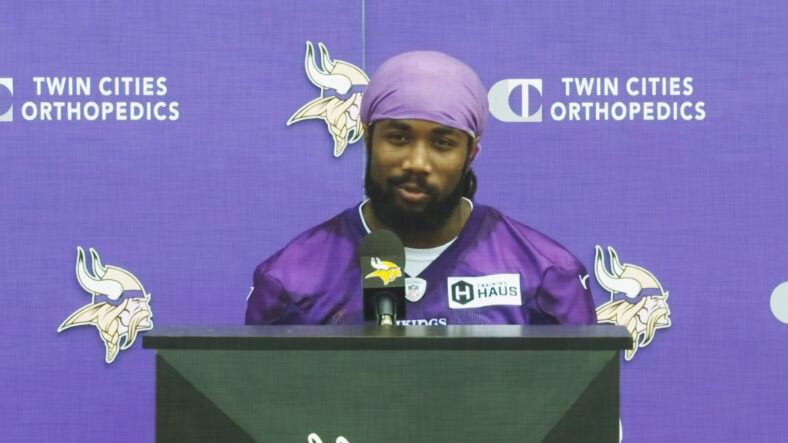 The bleakest point in Sunday’s game probably came in the third quarter with the Vikings trailing 24-14 after a Detroit Lions touchdown. With the Vikings at the Lions 48-yard-line, Dalvin Cook fumbled the ball after colliding with Ezra Cleveland, and after the play, Cook left the game with an injury. He would not return. The Vikings lost the ball and their RB1 over the course of one play.

Of course, the Vikings eventually went on to win 28-24 after Kirk Cousins and K.J. Osborn connected for a 28-yard touchdown in the final minute of the game. Cook’s injury is now being described as a shoulder dislocation as well, and the Vikings consider him day-to-day.

Cook had recorded 17 rushes for 96 yards and a touchdown prior to his injury. Essentially, he had put any questions regarding whether or not we should be concerned about him to rest. Now, following the injury, it is being reported that the Vikings are expecting Cook to play on Sunday in London with a brace on his shoulder, per Mike Florio of ProFootballTalk.

Assuming Cook is fully healthy by Sunday, this injury shouldn’t cause much concern for Vikings fans. That said, if the veteran RB is any less than 100%, the Vikings should consider sitting him out of Week 4’s game.

My stance on this may have changed if the Vikings lost to the Lions and were in danger of falling to 1-3, but as of now, the Week 4 game against the Saints does not hold massive implications moving forward this season.

The Vikings also have massive depth at the running back position, including preseason star Ty Chandler who has not suited up for a game yet this year. Alexander Mattison has plenty of starting experience over the course of his career, making six starts since 2020. Minnesota has plenty of options in the backfield this week against the New Orleans Saints.

No matter what, the upcoming days should be devoted to making sure Cook gets back on the field healthy this season. If that means he’s good to go for Week 4, then that’s great, but the Vikings have no reason to push him to start if the injury lingers into next weekend.