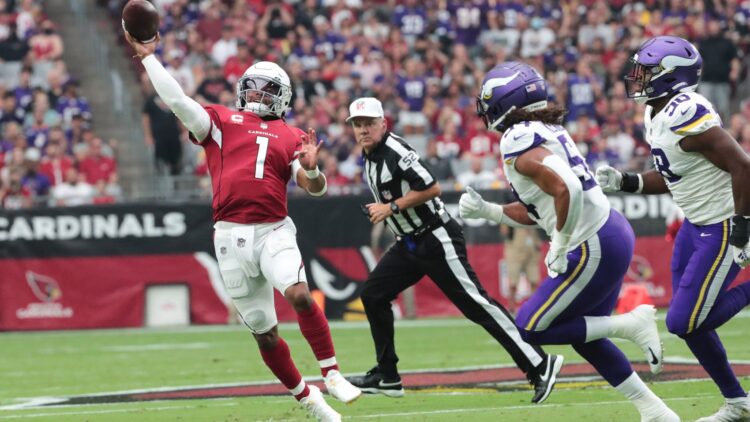 Arizona Cardinals quarterback Kyler Murray (1) throws the ball away under pressure against the Minnesota Vikings during the first quarter in Glendale, Ariz. Sept. 19, 2021.

The NFL regular season officially begins tonight, ladies and gentlemen. With that, the NFL standings predictions series must come to an end so we can get to the real football and watch these predictions be proven horribly, horribly wrong. The final division on the list is the NFC West, and here’s how it stacks up.

The Super Bowl champions are coming off a magical ride in which so many veteran players cemented themselves in the ranks of NFL history. Now the question is, can they do it again? In a weakened NFC West where Russell Wilson is no longer a competitor, and a Cardinals team that lost a number of pieces, they should comfortably make the playoffs again. Matthew Stafford’s elbow injury causes some concern, and they may get off to a slower start with a tough schedule, but they’ll be NFC West champs at the end of the year.

The 49ers are tossing Trey Lance into the starting lineup to start the year, but they’ve instantly caused some doubts by keeping Jimmy Garoppolo around. That said, you can also think of this as a team that could revert back to a QB that helped them get to the NFC Championship Game just a season ago. The Niners have a number of weapons on the offensive side of the ball, and their defense always causes opponents trouble, so this team will make another trip back to the playoffs.

Not only is DeAndre Hopkins suspended for the first six games of the regular season, but this team lost a number of crucial pieces from the previous season, Chandler Jones, Christian Kirk, A.J. Green, and Chase Edmonds walked in free agency, putting a team that has struggled to win games without Hopkins in an even more precarious spot. Additionally, it was a strange offseason surrounding Kyler Murray and his contract situation. The Cardinals are going to step back in the NFC West this season.

No Russell Wilson on the team means the Seattle Seahawks are in for a true rebuild. Luckily for them, they have some nice pieces in place that could help them turn this around sooner than later, but they have to find a quarterback other than Drew Lock or Geno Smith to make that happen. The Seahawks finish at the bottom of the NFC West once again.