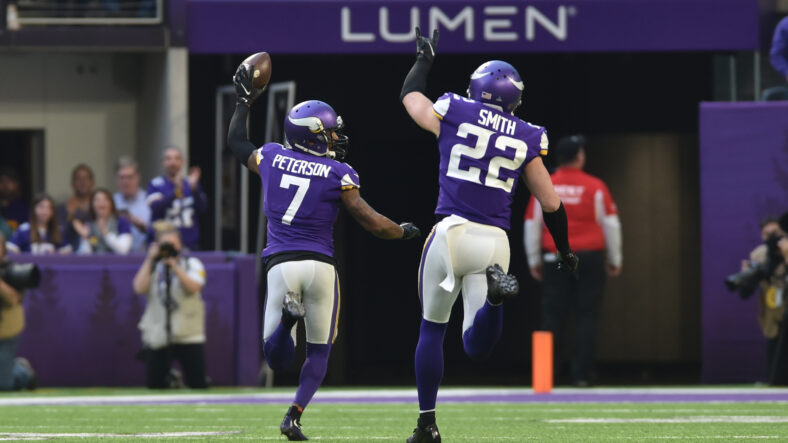 Kevin O’Connell has revealed who the captains will be for the 2022 Minnesota Vikings.

On offense, there is Kirk Cousins, Dalvin Cook, Adam Thielen, and Brian O’Neill. The defense will have Patrick Peterson, Harrison Smith, and Eric Kendricks. C.J. Ham is the special teams captain. Take a look at what coach had to say:

The list of players doesn’t include too many surprises. The starting QB is joined by some really excellent veteran players.

As Kevin O’Connell notes, though, there are 20 Vikings who received votes to be among the captains. One thinks of Za’Darius Smith, Harrison Phillips, Justin Jefferson, Danielle Hunter, and Greg Joseph as just a few examples of players who could have been chosen.

Obviously, Minnesota’s chances at winning a Super Bowl go beyond just the captains. Nevertheless, these eight players are among the most important on the roster. Four of the top-five cap hits – Cousins, Cook, Kendricks, and Thielen – are among the captains. O’Neill is sixth for his cap hit, and Smith is seventh. The point, folks, is that the players who will be leading their peers are the same ones who are being paid the most by the team (with Peterson and Ham being two exceptions).

If we had to identify just one player who is the most important, then Cousins is likely the one to focus on. The purple QB has the largest cap hit and he plays the game’s most important position. He has a disproportionate impact on whether the Vikings win or lose. He’s entering Year 5 in Minnesota, so fans are looking for more team success. O’Connell is supposed to help Cousins ascend from being a really good QB to being a great QB.

Minnesota has plenty of strong veterans on the roster. This is a team that is trying to compete for the Super Bowl, and the roster reflects that reality. Combined, the eight captains have seen a lot and experienced quite a bit in the NFL.

If I’m not mistaken, though, none have ever won the Super Bowl. Hopefully, that reality changes in the not-too-distant future.