Smith-Marsette Swiped, QB3 in the House, Short on Funds 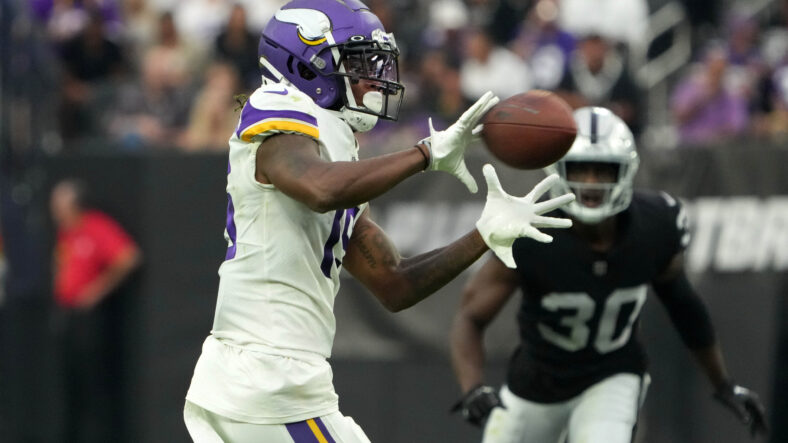 The following questions are about current Minnesota Vikings topics, answered by PurplePTSD. Today is the September 1st edition, addressed in a from-the-hip fashion. If you have questions, please email them to [email protected]

Q: Will the Vikings regret letting Ihmir Smith-Marsette walk to the Bears?

A: Probably every now and then or once or twice?

Smith-Marsette was on track to be the Vikings WR5 with Jalen Reagor in the house. His release, although surprising, isn’t a national emergency. Perhaps he catches on with the Bears; maybe he’s irrelevant.

The Bears have about six other WRs of Smith-Marsette’s caliber, so that can either be good or bad for the second-year wideout. Smith-Marsette played well in flashes last year and this summer, but the Vikings community is overreacting a bit to his exodus.

The Vikings will be just fine without him. Hopefully for his sake, he takes off in Chicago or elsewhere.

Q: Was David Blough a good choice for the Vikings at QB3?

A: Yes. He won’t really play, but he’s an admirable insurance policy.

Blough will likely live on the practice squad while Kirk Cousins and Nick Mullens hold down the fort at quarterback. Blough exists on the Vikings roster only for emergencies.

He’s better than Kellen Mond and Sean Mannion — if that helps for context. A Big 10 alumnus (Purdue), Blough has started five games in his career. His team lost all five.

Q: Do the Vikings even have enough money to sign another “big” free agent?

$2.28 million is the reality, and that mark does nothing to sign a player like Ndamukong Suh, for example. What you see is what you get for the 2022 Vikings this late on the calendar. They’re in a grim spot for cap space, so any additions will have to come from dinker contracts.

Cap navigability should enhance as Adofo-Mensah is on the job longer.