The Challenge of Aidan Hutchinson 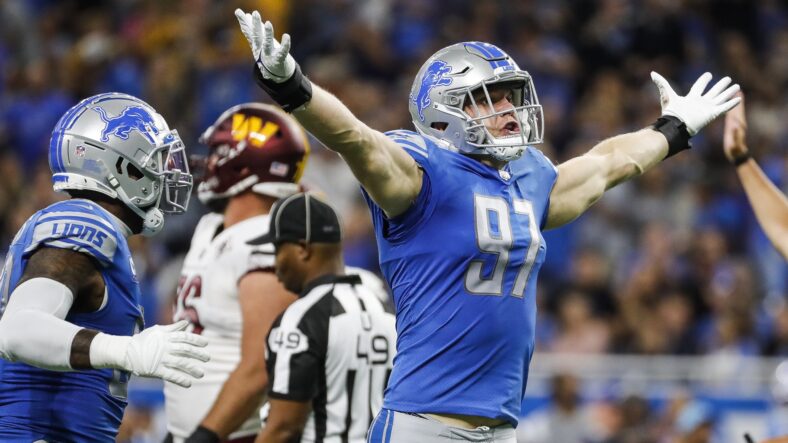 In Week 2, Aidan Hutchinson put up 3 sacks. It’s the kind of stat total that will raise some eyebrows.

The crazy thing is that his stats didn’t end at the 3 sacks (even though they’ll get most of the headlines). He also had 6 pressures and and a pair of TFLs.

Coming out of college, Aidan Hutchinson was regarded as one of the draft’s best prospects. He ended up going second overall to Detroit. His final season in college featured 14 sacks and 16.5 TFLs. It’d be surprising if he could match those totals as a rookie, but he has had a nice start to his career.

At 6’7″, 265, he certainly looks like an NFL edge rusher. Partner that size with his 4.7 speed and it’s not difficult to see how he could be an issue for NFL offensive lines.

His score on PFF suggests that he still has room to improve. Currently, he is the 65th-ranked edge rusher on PFF. Somewhat unexpectedly, it’s his pass rush grade that is dragging him down. They have him at 95th out of 98 edge rushers. His pass rush score is worse than both D.J. Wonnum and Patrick Jones II, Minnesota’s two backup edge rushers.

PFF grades, of course, aren’t the only way of evaluating a player. Nevertheless, the grade does give the sense that the rookie still has some room to grow.

In the first video, you’ll see Hutchinson get to Carson Wentz for the sack. It is notable, though, that it takes a few seconds before he gets to the QB. If Wents was able to be more decisive, then Hutchinson isn’t adding to his sack total.

Detroit is wisely finding ways to feature Hutchinson. They’re moving him around, allowing him to use and speed and length to create issues. How can Minnesota undermine this approach?

Well, it can be begin with having excellent play from the two offensive tackles. On the snaps where Hutchinson is along the edge, Christian Darrisaw and Brian O’Neill will need to be sharp. From there, it’ll be important for the OL to have a crisp understanding of their responsibilities. Hutchinson may get moved around with stunts, so the linemen will need to be able to pass off Detroit’s pass rushers.

Finally, we’ll need to look for some great play calls from Kevin O’Connell. Keeping Detroit off balance with a good blend between the run and pass would be ideal. Being more unpredictable with the screens would be a similarly positive pursuit. Kirk Cousins can hopefully be decisive and show good poise as Detroit’s pass rush nears.

As Josh Frey suggested, the Lions aren’t a team to overlook. Fans should expect a close, competitive game. Aidan Hutchinson is likely going to make some plays. Hopefully, Minnesota can make enough plays to overcome the impact from Detroit’s young edge rusher.